Battle of the Ikan

The Russian-Kokand war began in 1850 and led to the signing of a profitable trade agreement with China, the previously unassailable fortress Ak-Mechet on the Syr-Darya was captured. After some pause caused by the Crimean War, Turkestan and Chimkent were occupied in 1864. In Chimkent troops secretly entered the fortress through a water supply — demoralized the garrison did not resist. The campaign went to the siege of Tashkent — the largest city in Central Asia.

The regent of Kokand, Mulla Alimkul, decided to recapture the fortress of Turkestan while its walls were not yet restored after the previous assault. On December 4, his ten-thousandth army with three cannons reached the village of Ikan, located 20 miles from the city. Lieutenant Colonel Zhezhuchnikov, equipping the transport to Chimkent, received messages from the guard Uzurbai about “oh, taksyr, cop, back-cop” - “many, many” horsemen who appeared in the vicinity. Immediately the hundred of esaul Vasily Serov, consisting of: 2 chief officers, 5 non-commissioned officers (shown in the center of the print), 98 Cossacks, plus 4 artillerymen with advanced artillery system — a mountain unicorn with 42 shells, a paramedic, a «fuhrstaat» (transport N.C.O.) and three Kirghiz camel drivers. 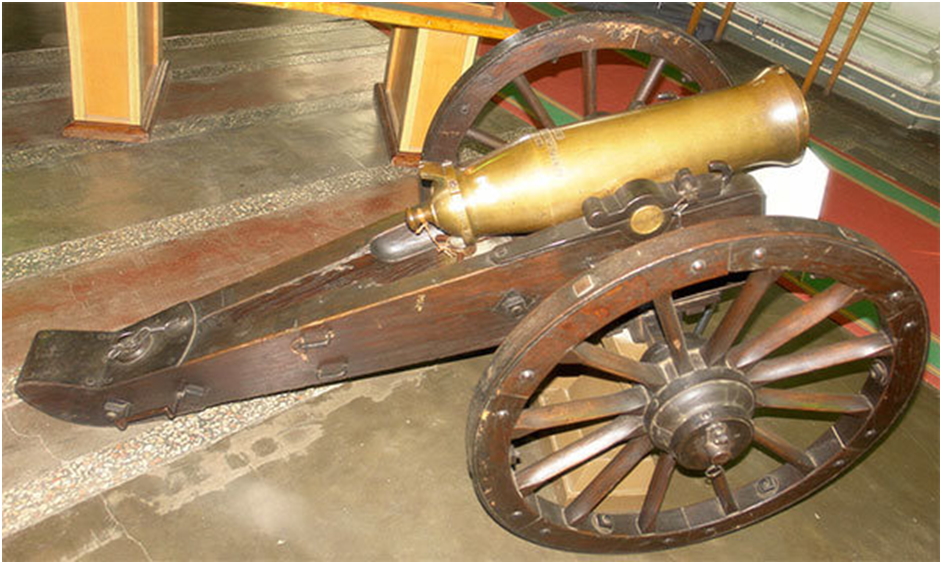 Despite the patrols and precautions, by nightfall, the hundred were surrounded by large forces of the Kokand forces. Cossacks managed to occupy a small ditch, place the horses in the center and barricade themselves with sacks of provisions and fodder. The first attack of the Kokand forces, led by a former sergeant of the Siberian Cossack army who adopted the Muslim name Osman, was stopped by a rifle volley and close range buckshot. Several more attacks were repulsed and the Kokands camped nearby. The Cossacks sent a messenger for help, but as it turned out later, he was intercepted and killed. At night, the Cossack’s position was barraged with cannons, the very first bomb killed three horses, later almost all the animals were killed and used to improve «fortifications». On the eighth shot, the unicorn's wheel broke, but the feuerwerker Grekhov tied to it the wheels from the charging boxes, the hubs of which were larger, but allowed to fire, manually dragging it from place to place, creating the impression of an «existing battery». Using the range advantage of rifled barrels (Crimean War was a good lesson and some Serov’s Cossacks fought there against the UK and France), the Cossacks killed the Kokand commanders and shot a horse under Alimkul himself. The next day, the Kokand troops began to build movable shields made of wood and vines.

The Crimean War lessons were learned and in 1856 the last muzzle-loading, but already rifle was introduced into service. The range was increased from 300 to 600 meters. The sight was marked up to 1200 meters, so with the presence of a spotter or competent officer with powerful optics, it was possible to fire salvo fire for a 1-kilometer distance. The "Cossack’s" modification, developed by the engineer Alexander Efstavievich Chernolikhov, entered service in 1860 with 1000 meters sight, a narrow butt and a "button" instead of a classic trigger according to the Asian fashion. The most important part of these rifles was the small caliber rifled barrel. To start its production, the Tula and Izhevsk factories purchased 24 cutting machines, boring machines and sights production machines from Belgian gunsmiths FALISSE & TRAPMANN from Liege. The price for the one barrel was 1,75 rubles (Artillery magazine, 1857, No. 1, p.62-63). The plan was to produce 100,000 barrels in 2,5 years. 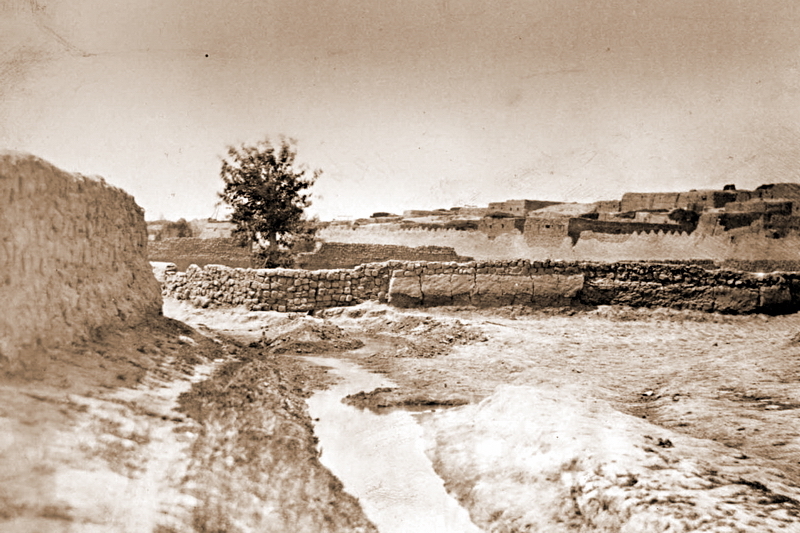 Meanwhile in the Russian fortress sounds of battle were heard, so lieutenant Sukorko lead a group of best riflemen volunteers to help. After reinforcements were sent, commanding office Zhemchuzhnikov began to afraid he can’t defend the fortress effectively with the remaining 300 soldiers and 8 guns, so he sent Sukorko a note “Peter Logginovich, if you will see huge forces, then, without helping out hundred, return back to reinforce the local garrison”. Sukorko reached the sandstone chain, heard shots behind it and been surrounded by superior forces. At the same time, Syzdyk sultan, who commanded this war party, sent six thousand soldiers to bypass Sukorko towards the fortress. Lieutenant Sukorko decided to follow the order and commanded to turn back despite the discontent of his subordinates. As was confirmed later, only a mile was left to Serov. Later Major General Chernyaev of the head of the frontline line, sued Sukorko for this and wrote: “due to shameful cowardice, he did not timely provide support to the Ural’s hundred of Esaul Serov, surrounded by Kokand forces near the town of Ikan, and almost caused their death, if Sukorko with his unit a moved mile ahead and climbed to the sandstone, there is no doubt that Serov, seeing the help that came to him, would have moved with a hundred to join him. Sukorko been transferred from the Turkestan, decorated with medals, but here we see a clash of two different military characters: ardent, irregular, the spirit of Cossacks cavalry charge on one side and the character which follows the order, holding the line – the true bulk of any big army. The first type of character reminds us of battles lost due to early charges of European knights. Lieutenant Sukorko wasn’t able to see the whole picture, being surrounded by thousands of enemies, he was possibly deciding the fate of the entire fortress with 300 soldiers. In addition, an influential general potentially has bigger room for maneuver than a lieutenant. I think Petr Sukorko’s honor is unattainted.

Serov’s Cossacks heard the shots heard from the sandstones, received a note in Tatar with the seal of Mullah Alimkul, which had been translated by Akhmet: “Where are you going from me now? The detachment sent from Azret is defeated and driven back; out of a thousand (!) of yours, no one will survive - surrender and accept our faith: I will not offend anyone! ". Hundred decided to hold on and send the news to the fortress. Cossacks Andrei Borisov, Pavel Mizinov and Bartholomew Konovalov volunteered. Mizinov was denied due to health. The other two with Kirghiz Akhmet, additionally armed with officer's revolvers, moved into the darkness, but been detected by the Kokand picket. Heading in the other direction, they managed to get through. At 21 o'clock in the fortress, they met with the returning Sukorko. It was decided to send a stronger force, but carts were sent for supplies. In the morning, the esaul Serov decided to delay Kikands by negotiations, asked for a meeting with Alimkul, was offered to go to him himself, negotiations started, but Kokands began to roll out the shields, Serov broke off negotiations and returned to the camp. 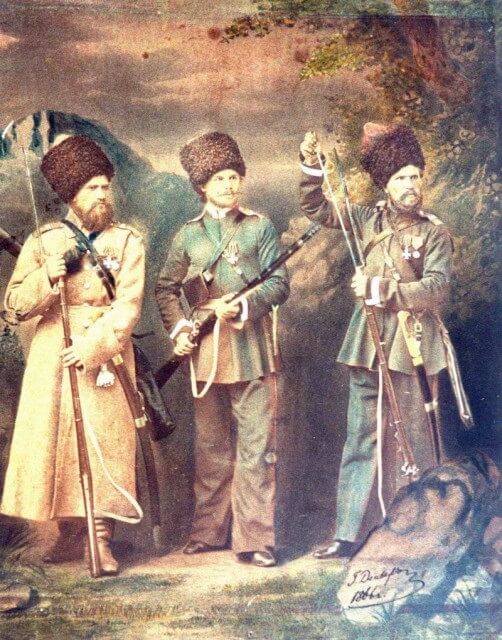 Illustration 3. On the left Cossack Andrey Borisov - a volunteer who broke into the fortress. 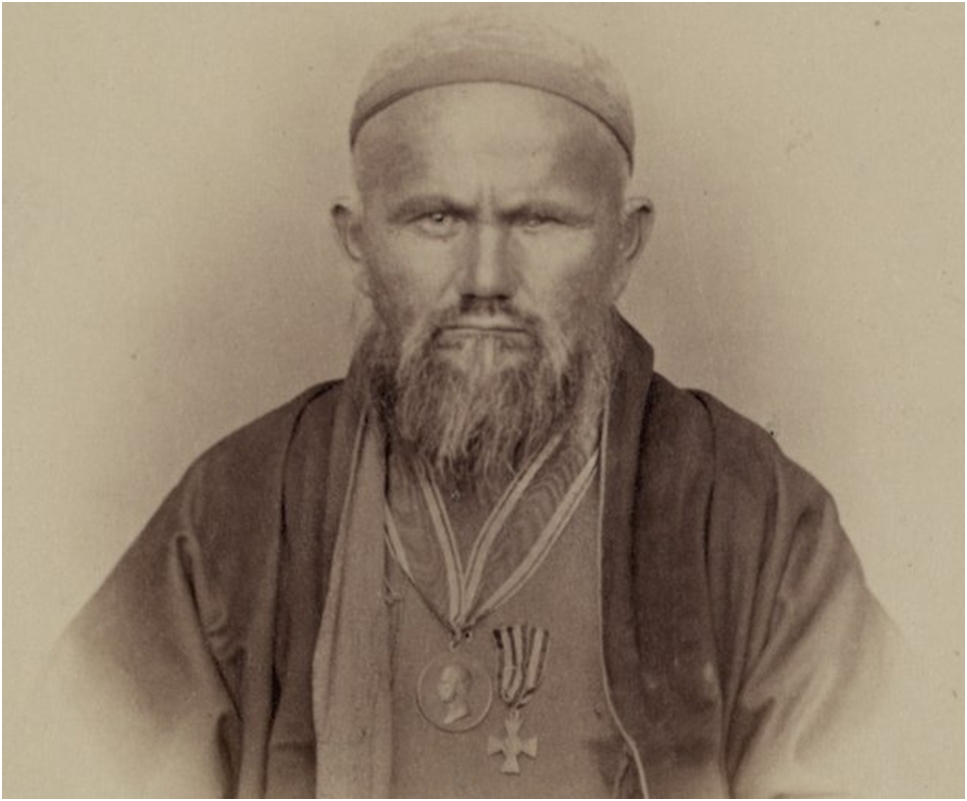 From seven in the morning, the battle started, the Kokands prepared 16 mobile shields and covers of brushwood, which neutralized the range advantage of the Cossack rifles. The unicorn's crew was knocked out, the Cossack Terenty Tolkachev replaced them and smashed the nearest shield with a well-aimed shot. Attacks followed one after another, by the middle of the day 37 heroes were killed, almost all the rest were wounded. Without reinforcements, the remains of the hundred riveted cannon, break unnecessary guns, dropped heavy coats, shouted "Hurray!" and charged! First marched in a square formation, later they used loose lines, bullets whistled around. Kokand riders transported shooters to place them in the front Cossack’s formation, moved some horsemen in heavy middle age armor hit a few and fell back. The Kokands first tried to cut off heads from Cossak’s dead bodies to show them to Alikul and to be rewarded. And at four o'clock in the afternoon, when it was already getting dark, “Russian bayonets flashed in the distance” and a group of 204 infantry, 10 Cossacks with two guns under the command of the same lieutenant Sukorko, came out to meet them. Commandant Zhemchuzhnikov sent him only at one o'clock in the afternoon (!), after 13 hours from the moment when Serov's messengers reached the fortress! Why Chernyaev blamed Sukorko, having a so doubtful chief commander?

Later Tashkent with a population of one hundred thousand, 15 thousands garrison with 63 guns was taken by Mikhail Grigorievich Chernyaev's unit of two thousand people with 12 guns. The Russians managed to sneak up to the wall at night through the gardens, and been supported by some locals. Minister of War Milyutin did not give an order to take Tashkent, the campaign’s initial plan was to level the defensive line and stop in Chimkent. Chernyaev, which haven’t faced fierceful resistance, took the initiative and as a result of more than two months operation captured the city. State councilor Alexander Polovtsev wrote in his diary in those days, “Today we received a message that General Chernyaev took Tashkent. Nobody knows why and for what. There is something erotic in what is happening on the borders of our empire. " For exceeding his powers, due to the dissatisfaction of Bukhara and a strong international resonance, especially from UK, which feared that Chernyaev would not stop and move to India (a salute to emperor Paul I), the general was removed from office, but returned later. 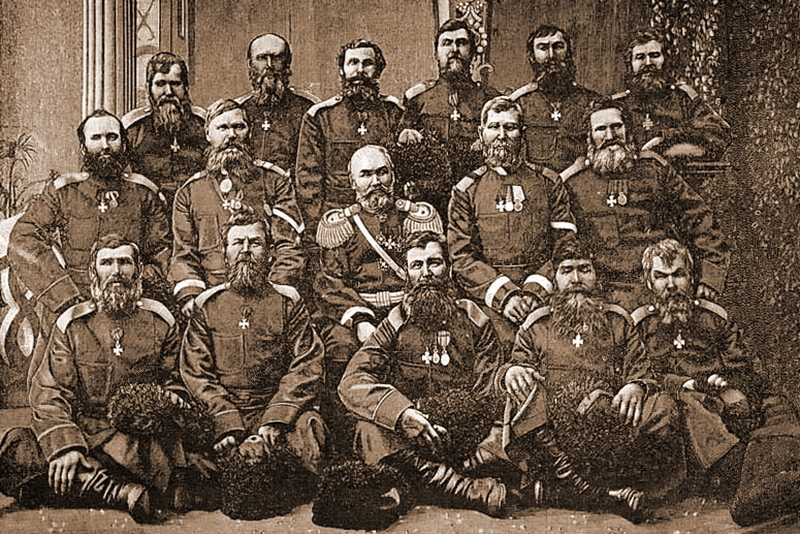 Illustration 4. Photo of the Cossacks the Serov's hundred in a photo taken 25 years after the Ikan battle. In the center V.R.Serov

In memory of the Ikan battle, the Cossack song "In the wide steppe near Ikan" was composed by the former commander of this hundred, the esaul A.P. Khoroshkhin (killed in the battle with the Kokands near Makhram on August 22, 1875) https://www.youtube.com/watch?v=l-V_0xpEIzI 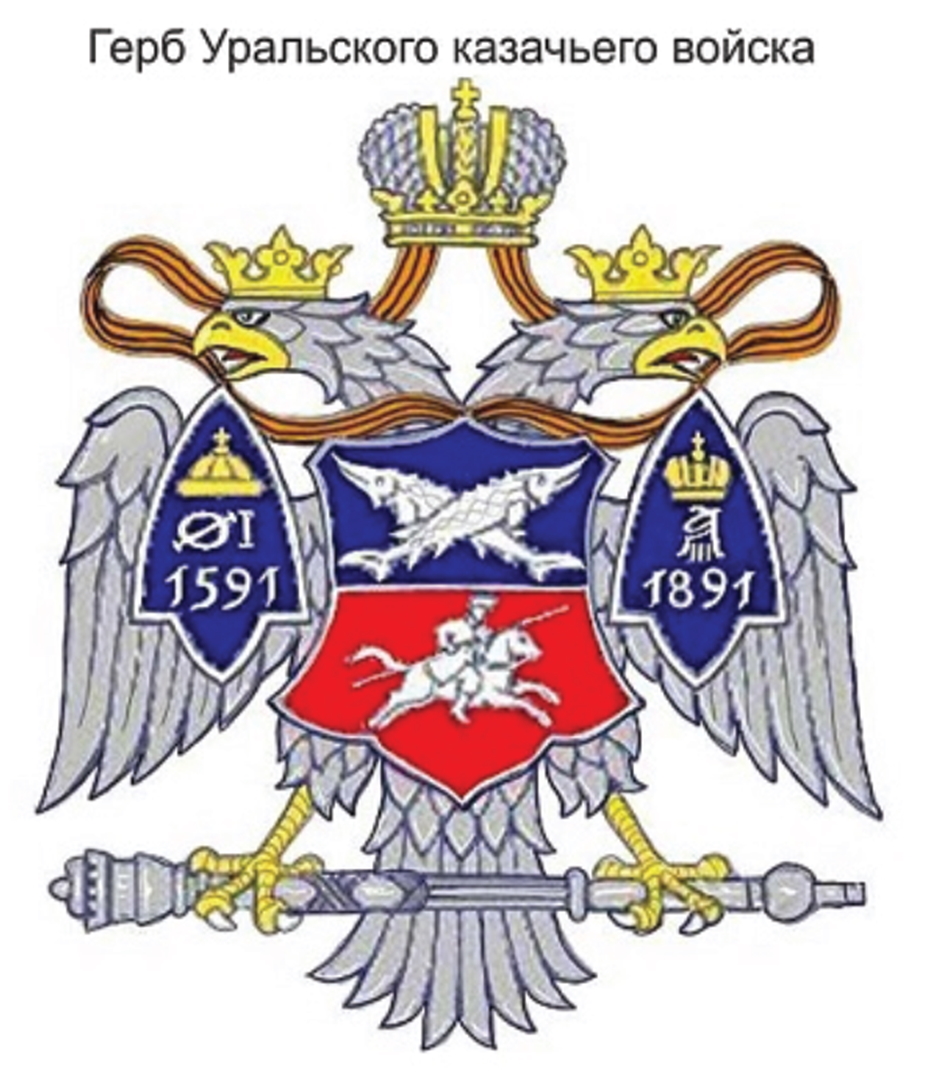 Additionally, I would like to mention the main trade of the Ural Cossacks, or why two you can see two sturgeons in the lower part of the print. The Ural Cossacks have always been the main supplier of caviar sturgeons. Cossacks had a privilege from the Tzar to build on the river Yaik (Яик) special dams for fishing with guards and even cannons. In December, after a cannon shot, the Cossacks went out onto the ice, chopped it up and dragged fish from the pits with hooks, immediately selling the surplus for salting to merchants standing on the banks. 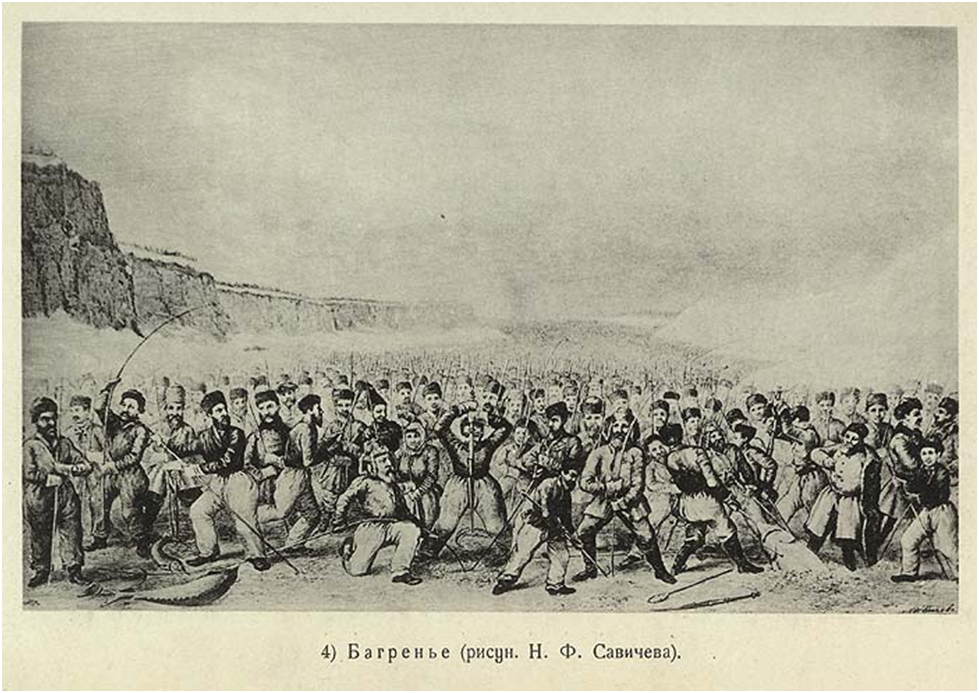 Illustration 6. Ural Cossack's fishing with hooks on the ice 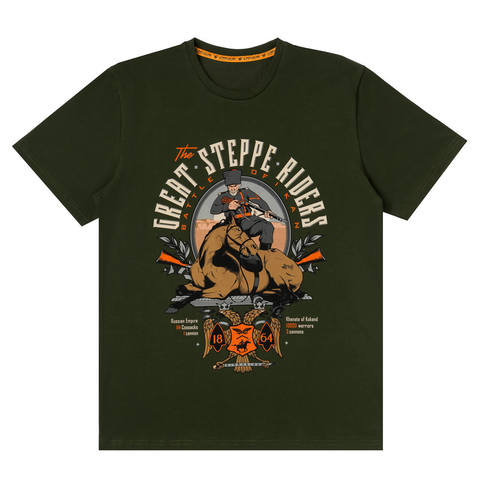 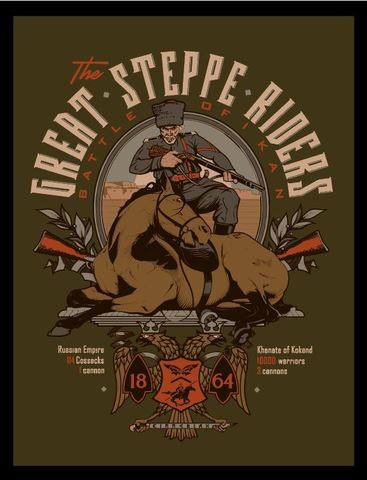