The Cimmeria as assemblage point

The oldest of the Indo-European peoples of Eastern Europe, whose name we know for sure, were the Cimmerians, who occupied the Black Sea steppes from about 1300 BC. In the eleventh century, they mastered iron extraction from swamp ore and become capable to produce full metal weapons in large numbers. In 713 BC the Scythians began to push them to the South, Cimmerians passed the Caucasian ridge through the territory of modern Georgia, attacked Urartu, while the Scythians bypassed the Caucasus through the territory of modern Dagestan (left and right vertical red arrows on the map below) 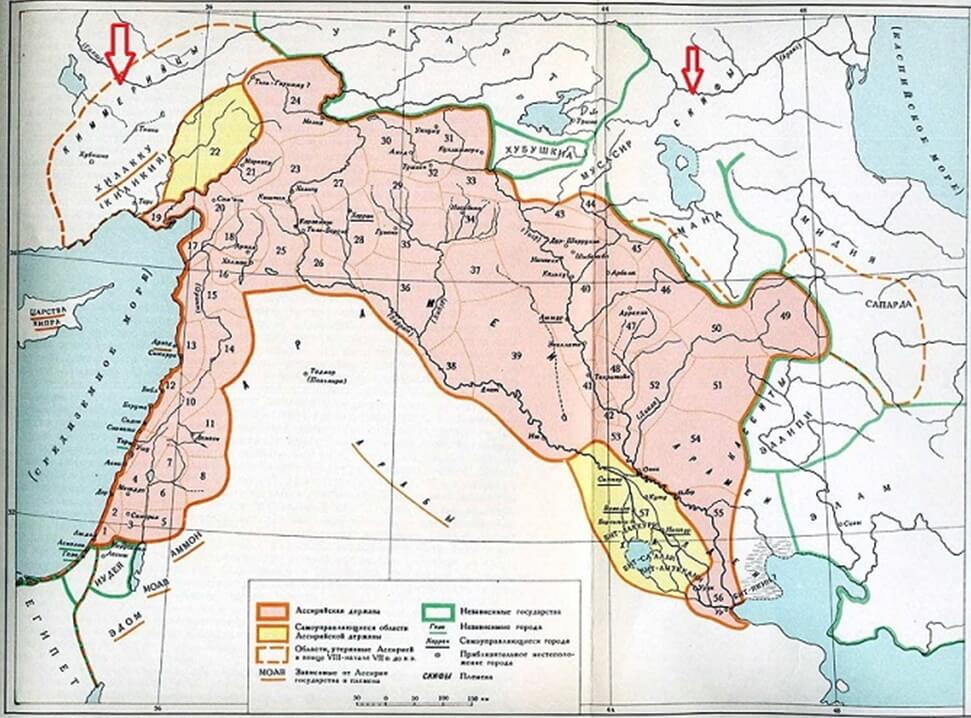 Illustration 1. Map of the Cimmerian migration through Caucasus

Later, the Cimmerians invaded Asia Minor and occupied part of Cappadocia, but between 637 and 626 BC, driven by the Scythians to the Black Sea coast, they were defeated by King Aliattus from Lydia. 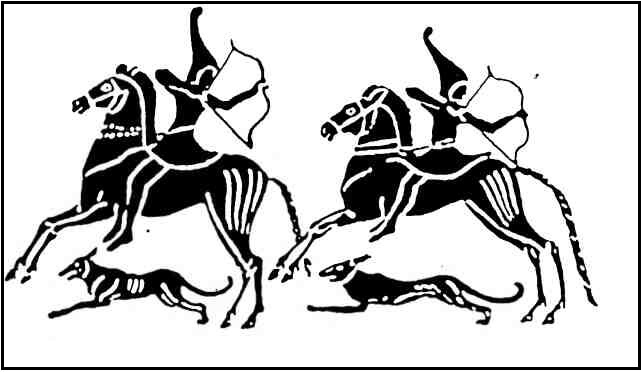 There is a popular theory about the second branch of the Cimmerians, who retreated along the Black Sea to the Dniester floodplain, where the part of the kings decided to move back, as a result of an internecine battle, about 10,000 supporters of the return died, the rest entered Thrace and appeared in 279 BC during the attack on Delphi in Greece together with the Illyrians, but were defeated. Later in 113-101 BC, they invaded the Roman Empire along with the Teutons, first had some success, then been utterly defeated by Marius near the Italian city of Vercelli. Most of the men were killed in the battle, and over 80,000 women and children were sold into slavery. A small group of survivors fled to the Jutland Peninsula, in the lands of modern Denmark.

This is confirmed by the distribution of the Y chromosome Q of the haplogroup among the European population, which coincides with the stages of the Cimmerians migration. 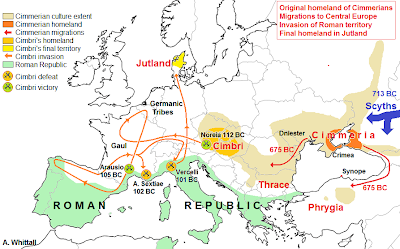 Illustration 3. Map of the Cimmerian migration over Europe

Some historians think that the Roman authors mention these events incorrectly calling the Cimmerians Cimbri, while opponents of this theory argues that the Cimbri are a Germanic tribe and have nothing to do with the nomads who left Crimea.

During these times the Germanic tribe of the Goths migrated to the Crimea from the Baltic Sea and lived there, partially preserving their culture until the 18th century! This confirms the theory of zones where Germanic tribes and nomads mixed into so-called Celto-Scythians (ancient greek Κελτοσκύθαι) 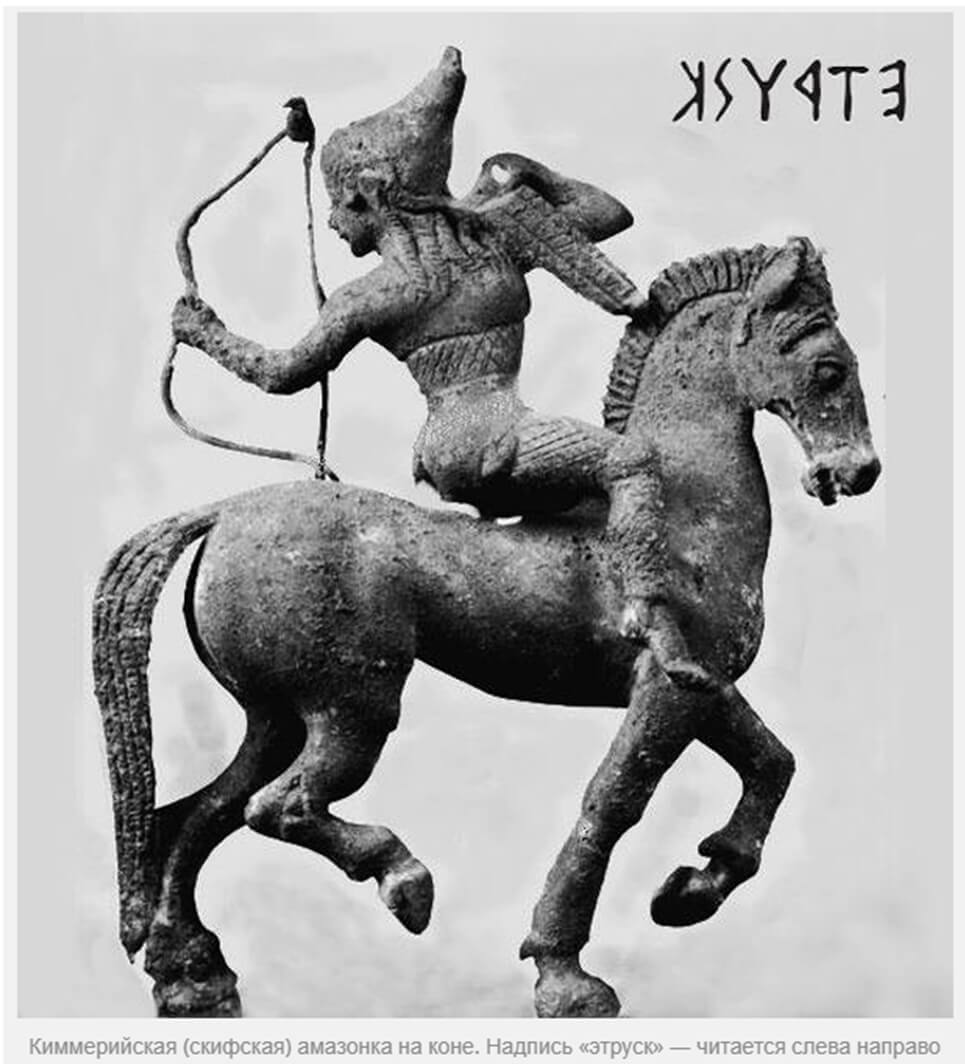 Illustration 4. Photo of the statue of the Kimmerian (Scythian) female horse archer. Etruscan writing in top-right. 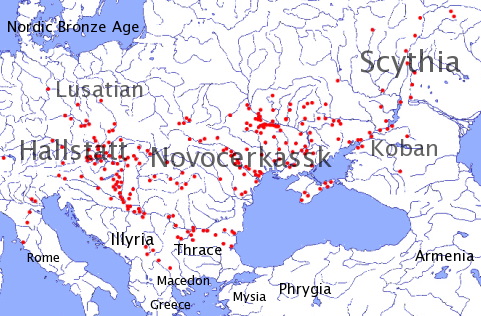 Illustration 5. Map of where Scythians artefacts were found. There is the hypothesis that Scythians and Cimmerian were two branches of the same people. 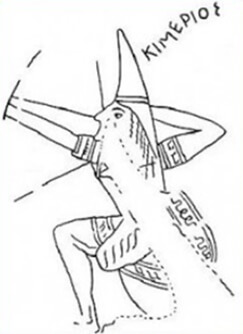 Illustration 6. Drawing of the Cimmerian archer on the Greek vase

It is difficult to find the truth now, the article is an attempt to feel the spirit of these ancient сaucasian horse archers, who began their journey from the shores of the Azov Sea and dissolved in Europe. 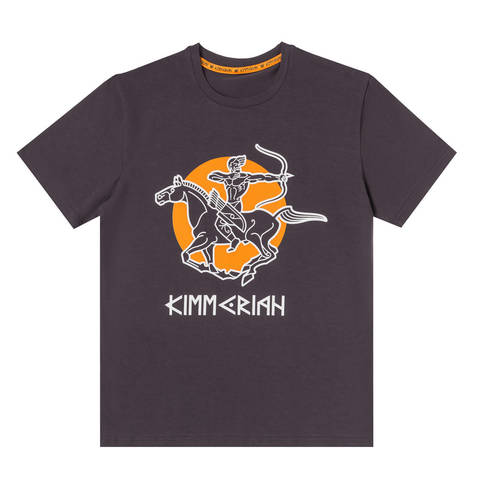 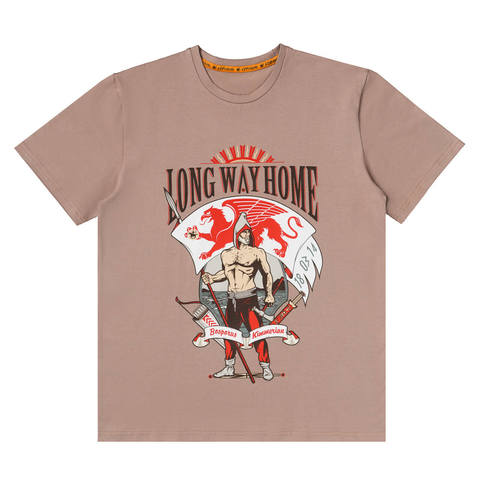